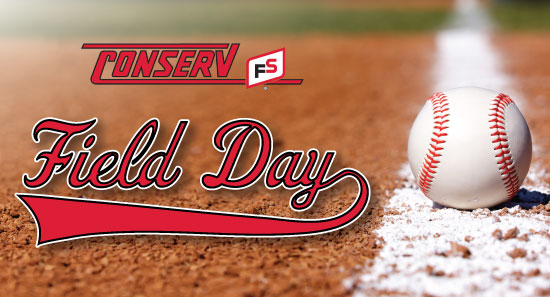 JOIN US ON AUGUST 16TH

You can park in our campus parking garage, which is off Bonnie Brae between Augusta and Division Street. The baseball field is directly next to the parking garage.

This is a link to our campus map; the parking garage is marked by the blue rectangle in the upper right corner of the map.

Reserve your spot today as space is limited.

Grub Control with Fertilizer with MERIT® 0.2 or Imidacloprid 0.2 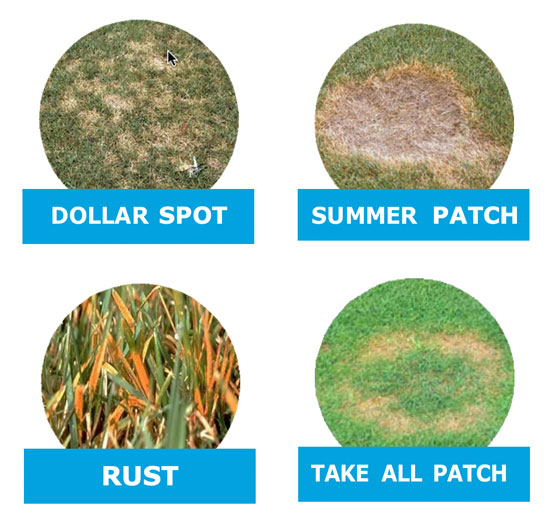 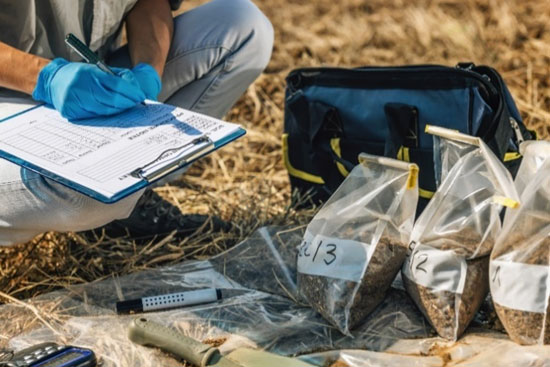 Soil testing provides an estimate of the plant-available nutrients in the soil and is an essential tool for a sound fertilization program. Periodic soil testing will help to correct nutrient deficiencies, avoid excess fertilizer applications, and maintain a healthy lawn.

Grass seed will germinate at a wide variety of temperatures; the optimum temperatures for germination are in the table below. The temperatures listed are air temperatures which would be almost identical to that in on the surface of the soil barring radiation effects.

Most of our cool season grasses can germinate almost throughout the summer, so there are many other factors control the success of seeding. Poor irrigation, diseases like damping off, and weed pressure are the most common causes of seeding failures. 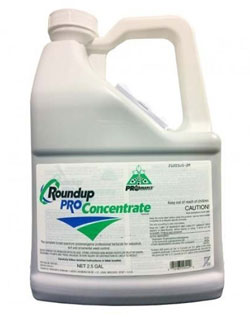 Prices have tripled, and we don’t expect much new product by this spring.

Prices for glyphosate and glufosinate have gone through the roof as supplies have been low and are forecast to be low going into this spring.

Multiple factors are to blame, says Dwight Lingenfelter, Extension weed specialist with Penn State. They include lingering supply chain issues from the COVID-19 pandemic, getting enough phosphorus mined to make glyphosate, container and transportation storages, and the shutdown and reopening of a major Bayer Crop Sciences plant in Louisiana because of Hurricane Ida.

WHAT IS GOING ON WITH FERTILIZER, GRASS SEED & CHEMICAL PRICING? 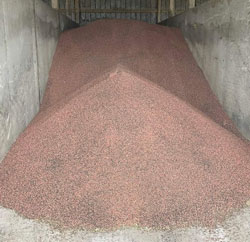 The landscape industry encompasses a wide range of service lines, areas of expertise and job positions. Here are some statistics and reports on the size and scope of the industry.

Size of the Industry
Statistics from the IBIS World Landscaping Services Industry Report shows that the landscape services industry has a market size of $105.1 billion in 2021. The industry employs more than 1 million people and represents 604,163 landscaping service businesses, an increase of 4.9 percent from 2020.

The Bureau of Labor Statistics tracks industry employment and wages and employment in the following categories:

Find data about the landscape industry in the following reports:

PROTECT YOUR CUSTOMERS' EVERGREENS THIS WINTER 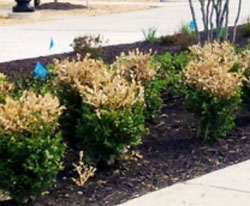 Anti-desiccant spray applied in the fall coats the foliage of your plants with this layer of organic "sealant" to help the plants resist the drying power of winter winds and conserve the moisture vital to their good health. Properly applied, a winter protection spray will safeguard your valuable plants through the cold months and gradually break down as warm weather approaches and your trees and shrubs begin spring growth.

FALL ARMYWORMS: WHAT NEXT? 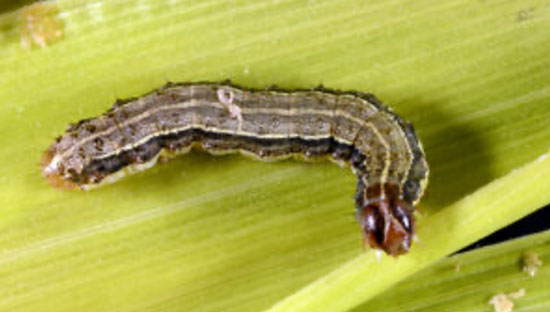 The entire Midwest just experienced one the worst fall armyworm outbreaks in decades, but for turfgrass professionals and enthusiasts, it’s not over yet. These seasonal, but sporadic insects made their appearance at the end of August, decimating lawns and other managed turfgrass. But, now that the damage is done, our focus shifts from crisis to recovery, with an eye open to the next generation.

Fall armyworms, as their name implies, usually show up in the late summer and fall in this part of the country. These insects remain in subtropical climates for most of the year, but hurricanes and tropical storms that sweep northward during hurricane season can carry enormous numbers of adults into the interior of the continent, sometimes raining fall armyworms over the entire Midwest and Northeast. Once they fall out of the sky, those adult lay eggs in masses on vertical objects including the sides of structures and even the flags marking golf holes. When enough egg masses are laid near one another, the resulting larvae can be so numerous that they eventually overwhelm surrounding turf, chewing it to the ground. The larvae that consumed your turf over the last few weeks have now pupated and are beginning to emerge as adults, so our efforts should shift accordingly. 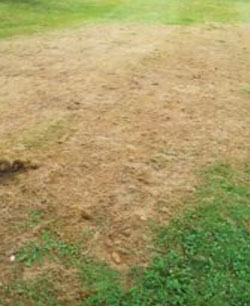 A stand of turfgrass damaged by fall armyworm larvae at the end of August in West Lafayette, IN (Jim Scott Photo).Giving turfgrass the best opportunity to recover should be the top priority. While soil temperatures remain high, disturbing plant crowns should be avoided, so raking out dead material, core cultivating and slit seeding should be put on hold if possible. Instead, consider irrigating the turf if the soil is dry. Irrigation can help reduce soil temperatures and stimulate plant re-growth. If the turf is not fertilized, a very light fertilization (<0.5 lbs. of N per 1000 ft2) may be in order, but keep in mind that well-maintained turf will generally not require additional nitrogen. If the turf isn’t growing, don’t mow it. In other words, do everything you can to protect the plant crowns as these will produce the new tillers and leaves that mark recovery.

Keep an eye out for the next generation of fall armyworm larvae. Almost all of the previous larvae have pupated and a few adults have begun to emerge. The adults resulting from the previous larval generation will soon busy themselves mating and laying eggs that will produce another, potentially destructive, larval generation. It’s still early in September and there is likely plenty of warm weather left this season to move larval development along. However, the next generation is not likely to reinfest the same stands of turf. Adults will disperse and find “greener pastures” that are more suitable for their offspring. That means scouting for egg clusters and soap flushing for larvae are the best ways to identify potential infestations before they cause serious damage. If we get lucky, temperatures will moderate and put the brakes on fall armyworm development, but I wouldn’t bet on it. The last half of September and first half of October could be interesting.

Fall armyworms are easy to manage and there are a number of insecticide active ingredients that will keep them in check (Table 1). Liquid applications are almost always preferable to granules since liquids provide better coverage and work more quickly. Granules also require rainfall or irrigation to release the active ingredient. Mowing just prior to application can increase penetration of the insecticide through the canopy and into the spaces where fall armyworms are active and feeding.

Insecticide active ingredients registered for use against fall armyworms in turfgrass.

That’s it 3/4 focus on turfgrass recovery and regrowth, and be alert to egg masses and developing larval infestations. If another generation of fall armyworms unfolds, its potential impact on turfgrass winter-hardiness and spring green-up could be a significant concern. 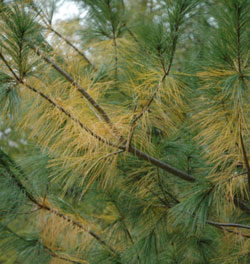 Every year, evergreens experience a seasonal needle drop that is a normal part of the plant's cycle. Needles of conifers have varying life spans and do not remain attached indefinitely to the tree. Many evergreen needles, as they age, will turn yellow, then brown, and drop off after one to several years. The change can be gradual or, with some species, quite rapid. Seasonal needle drop can cause concern to homeowners who are not familiar with this natural occurrence. In times of drought, needle browning may be particularly noticeable because more needles are shed in response to environmental stress. White pines show the most dramatic needle drop change.

Their annual loss of needles can be especially alarming on mature white pines, as the number of yellow needles outnumbers the current season's green growth. Typically, white pines will retain needles for three years, but in autumn, 2-or-3-year-old needles will change color and drop, leaving only the current season's growth still attached. Austrian and Scots pines usually retain their needles for three years. Red pine drops its needles in the fourth year. Spruce and fir needles also turn yellow and drop, but the change is usually less noticeable because their older needles are thinned progressively, making the process more gradual than in pines.

Control There is no control required. As long as needle drop is restricted to older growth and is not excessive, the "problem" is simply seasonal needle drop, a normal and natural process. Always follow good cultural practices to keep trees healthy. 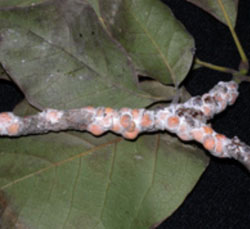 Magnolia scale is our largest soft scale insect, reaching ½ inch in length.  This scale spends the winter on small twigs as tiny, dark-colored nymphs.  In the spring, the scales begin to feed, mature, and change color.  The males, which turn white, are smaller than the females, about 1/8 inch in length, and emerge as tiny, gnat-like insects.  The males mate with the females and then die.  The females turn white to brownish-purple in color and continue to enlarge through July.

Magnolia scale adults Magnolia scale eggs hatch internally and the crawlers emerge from the mother insect. Crawler emergence occurs late summer into early fall.  Insect life cycles are dictated by heat so emergence of crawlers will vary from year to year.   On average crawler emergence occurs from late August through the end of September.  This would also be the best time to treat with insecticides (see chemical management below).  The crawlers move around until they find a suitable feeding site, usually on branches, where they settle down and remain through the winter.  The adult female dies after reproducing, but may remain attached to the stem for many weeks, making the population seem larger than it really is.

Damage Scale insects have sucking mouth parts and feed on sap from the tree.  They can remove large quantities of sap and can stress the host tree.  Trees can usually tolerate small populations of scale.  The extensive feeding by a larger population will stress the trees and often leads to yellowing of leaves and twig dieback.  Over time, an untreated population of magnolia scale may lead to decline of the tree. Excess sap is excreted by the insects as honeydew.  Honeydew is sticky and will coat plant parts and often drip onto surfaces under the tree.  A black fungus called sooty mold will grow on the honeydew, but does little actual damage to the plant.  The sticky honeydew and black sooty mold are often noticed before the insects are seen.  The honeydew may also draw other insects like ants and wasps to the tree.

Chemical Scale insects are very vulnerable in the crawler stage when the young are looking for a place to feed.  Adult scales are usually protected from chemicals because of their protective coating. Registered sprays applied before the crawlers are present will have little effect on population control. Timing of application is critical.  Chemical sprays would be used at the time of crawler emergence (on average from late August through the end of September).

© 2021 Conserv FS. All rights reserved. All trademarks, logos and brand names are the property of their respective owners.  /  Web development by risingline.com